Consumer Budget :   A consumer having fixed budget to buy a set of goods is consumer’s budget. Its exchange value of a consumer for a set of product and a particular time.
Example: In case of Richa , her pocket money was Rs 2000 which was her monthly budget.

Budget Set:  Set of products or bundle of products which a consumer can exchange or get under restriction of his/her budget is called Budget set.

In case of Richa : She prioritised as follows

And many more such sets according to her preference under Consumer budget of Rupee 2000.

Where p1 , p2 till pn  are set of products and x1 , x2 till xn are cost for respective product.

Budget line:  The set of products or bundle of Products which are selected by consumers on line of Budget is called Budget line.

In case of Richa any number of variation of Richa’s selection of products which cost exactly equals to Rupee 2000 is budget line. 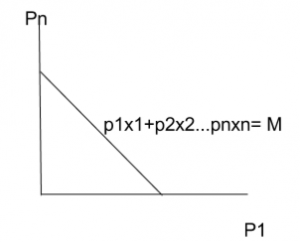 When a consumer get satisfied with one set of product more than other set of product in terms of volume as in 1 set volume is more and other is equal then this sort of preference is known as Monotonic Preference.

Amount of goods consumer is willing to give up for another goods is substitution of goods.

Diminishing rate of Substitution:  Amount of goods x1 we are using more to respective decreasing of goods x2 is rate of substitution. 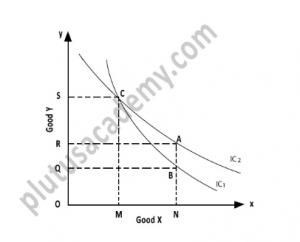 Plutus Academy has contributed these notes, one of the top coaching institute for  SSC and IBPS exams.

About the Author: Faisal Khan