SSC(Staff Selection Comission) conduct a most popular exam named as ssc in India. In this exam there are various posts like income tax officer , lower division clerks , upper division clerks and many more. This exam is conducted on following two levels:

There are huge number of vacancy are filled every year in India on the basis of this exam every year in various government sectors.

In these type of questions, The information  is given about the  different relationships  among Different people.  The relationship can be direct or indirect . After examining the question carefully we have to identify the relationship between people and answer the given questions Accordingly.

Cousins :  Children of aunt and uncle .

Sister in-law could be sister of spouse, wife of brother,  wife of spouse brother. 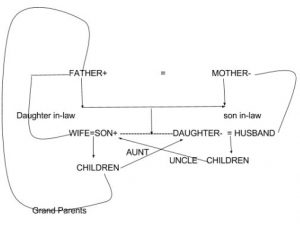 Q1. Introducing a man, a Woman said” his mother is the only daughter of my father”. how is the man related to the woman?

Q2.Pointing to a  girl in the photograph, Amar said ,” her mother’s brother is the only son of my mother’s father.” how is the girl’s mother related to Amar?

Q4  A,B,C,D,E and F are 6 member of a family.A is the son of C. and E is the daughter of A.D is the daughter of F  who is the mother of E.B   is the spouse of C. Find number of male and Female .Also find the relationship between B and D?

Study the following information carefully and answer the questions given below:

Q5. Which of the following indicates that ‘D is niece of A’?

Q6. What will come in the place of question mark (?) in the expression ‘A+B@C&D?E’ if it indicates that C is father in law of E?

Q7. Which of the following can be the correct conclusion drawn from the expression

Q8. Which of the following can be the correct conclusion drawn from the expression?

Q (9-10)In a family there are two fathers, two mothers, one sister, one brother, two daughter, one mother-in-law, one daughter-in-law, two sister-in-law, one son, one grandfather, one grand mother and one granddaughter.

Q 9.How many married couples are there in the family ?

Q 10. How many female members are their in family?

Join us on Telegram and Facebook for BANK exam is also asked in other government exam like BANK IBPS SO RRB SSC. These notes are prepared by Supriya Kundu who is  one of the best teacher in this field.If any question please ask  below.