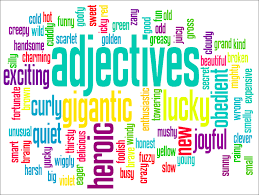 An adjective gives information about noun.

Rohan is a handsome boy.

In the above sentences handsome and beautiful are giving us information about rohan and she respectively.

Adjectives can be used in two ways-

When an adjective is followed by a noun then it represents attributive use of adjective.

Here soldier is noun and brave is adjective.

When a verb is followed by an adjective then it represents predicative use of adjective.

These are the adjectives that show quality of a person.

These adjectives show how much of a thing is meant.

These are of two types-

Few. some, many, several,all etc.

These denote exact no. like one, two, three etc.

There are twenty eggs in the basket.

I am having five chocolates.

These denote exact order of things or persons

The second chapter of this book is very tough.

The fourth row from right is vacant.

The last two seats of bus are vacant.

The first three chapters of this book are easy.

These adjectives point out to the persons/things.

This, that, these, those

This book is mine.

These sweets are tasty.

That girl is beautiful.

An adjective comes in three degrees-

(b)Comparative degree-when there is comparison between two people or two things.

Harish is taller than shyam.

Seema is more beautiful than reema.

Harish is the tallest of all the boys.

Seema is the most beautiful girl of class.

Some positive ,comparative and superlative degree adjectives are given below-

Some adjectives are changed to comparative and superlative degree by adding more and most to them respectively.

Rules for the correct usage of degrees of adjective

We always use comparative degree with “than”.

The USA is more powerful than any other country.

She is more courageous than her sister.

I am not feeling better.

Positive degree of adjective comes with the following words-

She is not so beautiful as her mother.

She is as good as her father.

Ziya is the abler of two sisters.

This boy is the taller of the two.

Which is the longer river,the ganga or the yamuna ?

“The” is used with superlative degree.

She is the most beautiful girl i have ever seen.

He is the tallest boy of my class.

While comparing two qualities of a noun or pronoun with each other, don’t use “er” format. Always use– More + positive degree

The board is more long than wide.(here both length and width are the qualities of board).

She is more beautiful than courageous.

We always use positive degree with comparatively and relatively.

Comparative and superlative degree can’t be used with these words.

We are comparatively safe here.

I am relatively well today.

In order to intensify the sentences we use-

This house is far better than that.

His performance was much better than mohan’s.

India is by far the most beautiful country of the world.

If we compare a noun with all other of same group or class than any other is used to exclude the noun.

Sachin is more popular than any other cricketer.(sachin is also a cricketer so to exclude sachin from all other cricketers we have to use other in the sentence.)

Sachin more popular than any footballer.(in this case sachin is not footballer so we don’t use other in such sentences.)

Mohini is taller than any boy in her class.

Mohini is taller than any other girl in her class.

We can’t use comparative degree with “times”.

My bungalow is two times bigger than yours.-wrong

My bungalow is two times as big as yours.-right

When two adjectives are used for a single noun and if both of them are connected with a conjunction, they should be in same degree.

The economy of a country got worse and more unstable.

He is the most talented but least known writer.

Your first impression is more everlasting-wrong

Your first impression is everlasting-right

She is junior than me-wrong

She is junior to me-right

If different words are needed with different adjectives, suitable words are used with each of them.

She is junior to and more courageous than me.

She is as beautiful as if not more than her mother.

And with plural common nouns we use plural verb.

The blind have sticks with them.

The aged are living in old age homes.

Blessed are the meek.

Correct use of some adjectives-

Uses of Little, A little and The little:-

Little :– hardly any , almost none

Eg:- there is little juice in the jug.

Eg:- Ram has little work to do.

A Little:- Small quantity, some but not many

Eg:- A little freedom is necessary for kids.

The Little:- Not Much but all that is available

Eg:- I hope you will be contended with the little wine left wine in the jar.

Eg:- Rama spent the little money she had..

A Few:- Small quantity but not much, some but not many

Eg:- I requested him to bring me a few books.

The Few:- Not many but all that are available

Eg:- The few days left I passed in her company were exciting.

Eg:- I hope the few moments we had were memorable.

Many used for countable Noun

Much used for uncountable noun

Some used in affirmative sentences.

with countable nouns to show no.

with uncountable nouns to show quantity.

She have some juice.

I have some colleagues.

Some is also used in interrogative sentences where the answers are expected in yes.

Could you lend me some pens?

Did you buy some clothes?

Any used in negative sentences.

She does not have any oranges.

Any is also used in interrogative sentences where the answers are expected in no.

Have you bought any mangoes?

Some adjectives are given below-

About the Author: niyati chaudhry

I am B.Tech in Electrical and Electronics Engineering , currently pursuing Masters in English from IGNOU and presently working as an ' English language Faculty' at Plutus academy for competitive exams like Bank PO , SSC etc. I have a great interest in writing to help students who can't afford classes. I believe in hard work as short cuts have short life.

5 Responses to ADJECTIVES FOR SSC CGL